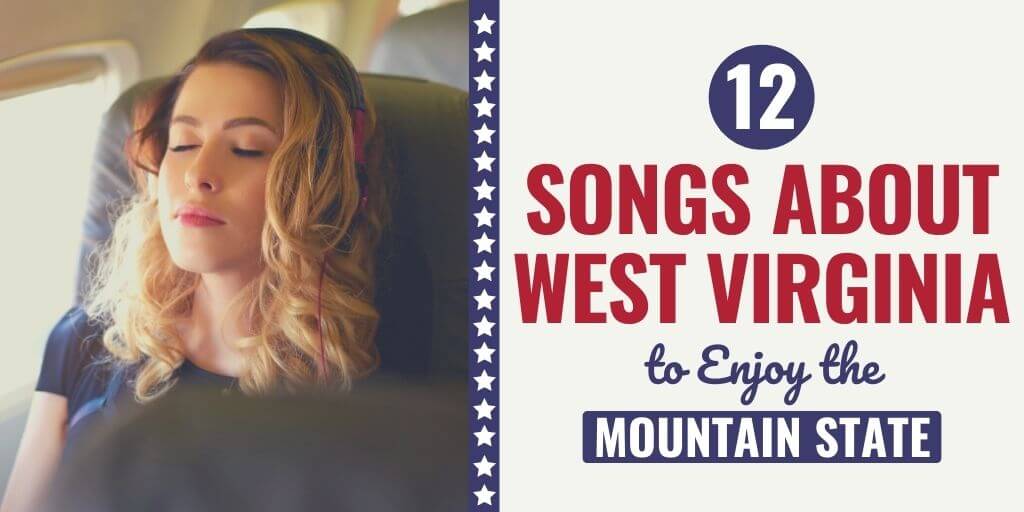 Each state is unique, and one of the best ways to get to know one is through songs. So in this article, we’ll introduce you to 12 songs about West Virginia.

Let’s look at the 12 most popular songs about West Virginia. Some have “West Virginia” in the title, while others tell a story about it:

In 2014, this song became one of the official songs of West Virginia. Although it was released back in 1971, it still warms the hearts of West Virginians and many other people heading home.

Denver’s friends Bill and Taffy Danoff started writing the song while traveling through Maryland, and he helped them finish it. It’s interesting that none of them had been to West Virginia or had any connections to it. Bill Danoff thought about using “Massachusetts” but gave it up because the word wasn’t musical enough.

Although not actually dedicated to West Virginia, the song highlights the state’s scenic beauty and the unique feeling you get when you’re coming home.

“Oh, the West Virginia hills! Where my childhood hours were passed,
Where I often wandered lonely, and the future tried to cast;
Many are our visions bright, which the future ne’er fulfills,
But how sunny were my daydreams on those West Virginia Hills!”

“The West Virginia Hills” was written as a poem in 1879. Although Ellen King is credited for it, some believe her husband, the Reverend David King wrote it. It was inspired by the beautiful landscapes of West Virginia, more specifically, the Glenville region. The author focuses on childhood dreams and how everything seemed possible back then.

The poem turned into a song in 1885 and was recognized as the state’s official song in 1961.

“West Virginia, my home sweet home,
Where mountains and hills and valleys too,
And the orchards, the farms, timberlands, all have charms,
And the factories and mines are on review.”

The author of the song, Julian G. Hearne, Jr., lived in Wheeling, West Virginia, and was an attorney and a military officer. Hearne dedicated it to his home and highlighted what he loved most about it. He mentions mines because West Virginia has dozens of them. They are a symbol of hard work, dedication, and unity.

This song was the first official song of West Virginia and was recognized as such in 1947.

4. “This Is My West Virginia” by Iris Belle

This song was designated as one of the official songs of West Virginia in 1963. It was written by Iris Belle, a musician from Buckhannon, West Virginia. The author reveals what makes West Virginia her home and why she loves it.

“Well, I’m leaving West Virginia in the morning
And I’m headin’ out that California way
I don’t know what I’ll find, but baby, it’s my time
And I’ll surely leave my heart below the Mason-Dixon line.”

Mattea wrote this song in 1986 for her album “Walk the Way the Wind Blows.” The author is a native of West Virginia but left it during the 1970s for Nashville. Although the song features California, Mattea used her personal experience to write about leaving home and exposing oneself to the unknown.

Mattea went on to have a successful musical career and won numerous awards, including two Grammys. She performed “Leaving West Virginia” at a concert in 2016 after the audience requested it and burst into tears while singing it. After the show, she stated she felt as if her young self was talking to her middle-aged self.

“West Virginia, oh my home,
West Virginia, where I belong,
In the dead of the night, in the still and the quiet,
I slip away, like a bird in flight,
Back to those hills, the place that I call home.”

Hazel Dickens, the author of this song, was born in Montcalm, West Virginia, and has always loved the state’s scenery. She dedicated this song to her home and how hard it is to live away from it. The author can’t remember why she ever left but emphasizes she knows where she came from.

Hazel Dickens had a highly successful career and wrote several songs related to home. She was the first woman to receive the Merit Award from the International Bluegrass Music Association.

7. “The Hills of West Virginia” by Phil Ochs

“The Virginia people watched as we went riding by,
Oh, proud as a boulder they were standing.
And we wondered at each other with a meeting of the eye,
When we drove through the hills of West Virginia.”

In this song, the author travels through West Virginia with someone and describes the sights. He emphasizes how proud West Virginians look and paints the scenery before him as he drives by. The song portrays what the author and his companion notice about the state and makes us feel like we were with them on the journey.

West Virginia lies in the Appalachian Mountains, so it’s no surprise that many are in love with its hills, which are a common motif. In this song, the author emphasizes how beautiful West Virginian hills are as God’s creations. The whole piece is about coming home to West Virginia and how there’s no place like home.

“When you’re born in West Virginia,
A miner through and through,
Union, God, and country
Was all you ever knew.”

The author devoted this song to the Upper Big Branch coal mine explosion that happened in 2010. It was one of the worst mining disasters in U.S. history, where 29 people were killed and dozens more were injured.

The Upper Big Branch coal mine was the first non-union mine in that region. This song is about what the author describes as better days when the union took care of the workers and respected their rights.

10. “The Girl From West Virginia” by Doyle Lawson

West Virginia has enormous reserves of coal, and it’s the leading state in underground coal production. Since so many peoples’ lives revolve around coal mines, it’s no wonder they often appear in songs.

In this song, the author talks about a girl he met in a coal-mining town in West Virginia. He describes how he has grown to like the sound of coal trucks, even though he thought he’d never put down roots.

“Almost heaven West Virginia,
Or is it almost hell?
Because for me, it’s hard to see
It’s hard for me to tell.”

Although most songs about West Virginia give you a heartwarming feeling, not everyone has this opinion. Since music enables us to express our attitudes and emotions, it’s natural to have conflicting perspectives.

The first line here is from John Denver’s song “Take Me Home, Country Roads.” Unlike that song, this one doesn’t represent West Virginia as an idyllic place. It’s quite the opposite; the author dislikes it and doesn’t see why anyone could like living there.

“In the state of West Virginia among the peaceful rolling hills,
There I met a mountain maid with eyes of blue,
Golden hair so soft and curly, and her lips were like the dew,
She was the queen of West Virginia, and her name was Linda Lou.”

The author talks about how he met and fell in love with a girl from West Virginia. Again, he mentions hills, which are typical scenery in the state. He says his heart is still in West Virginia with the girl he loves, even though he isn’t there anymore.

We hope you enjoyed our collection of 12 songs about West Virginia and that some of them will become your favorites. As you’ve noticed, most songs have a positive tone and represent West Virginia as a beautiful place that reminds them of love, childhood and coming home.

If you liked this article, you might also want to check out these posts.