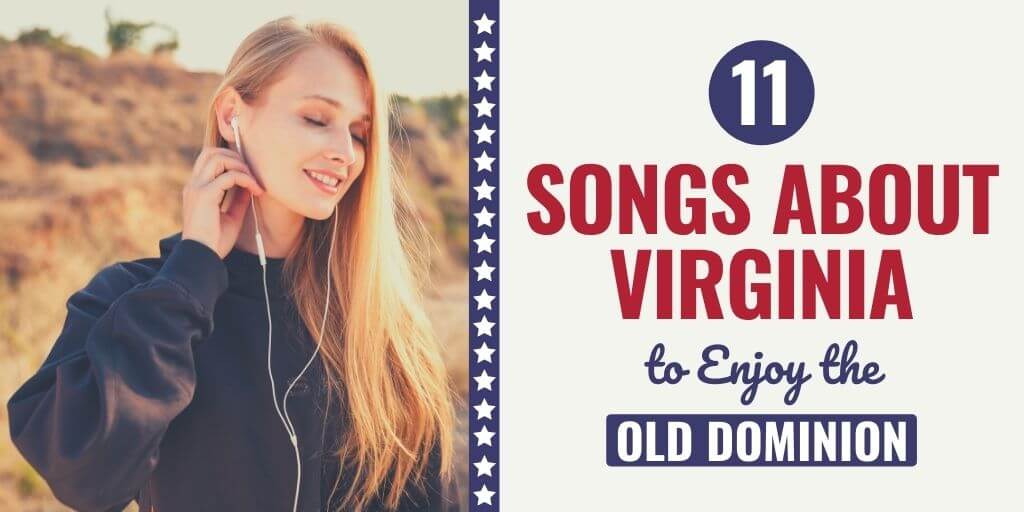 Virginia, or the “Old Domino State,” is an East Coast state with a rich history. Maybe you didn’t know that Virginia was named after Queen Elizabeth I, the Virgin Queen. And perhaps you didn’t know that the first Thanksgiving took place in Virginia. It is also the state where most U.S. presidents were born.

Even though this state was the place of numerous historically significant events, many are unfamiliar with them. However, an interesting and effective way to learn about a place is through songs made about it. So, to help you in this quest, we’ve compiled a list of 11 songs about Virginia in this article.

1. “Our Great Virginia” by Jim Papoulis and Mike Greenly

“You’ll always be our great Virginia
You’re the birthplace of the nation:
Where history was changed forever
Today, your glory stays, as we build tomorrow.”

This song is the Virginia State Anthem approved in July 2015 as the state’s official song. It refers to Virginia as the birth of the nation and the place that changed history, where the first British colonies were established in the territory of Virginia. It also briefly describes the nature that can be found in Virginia. Overall, the song gives a message about unity among the people living in Virginia.

“Take me out to the country; it feels mighty good out there,
When I get back to the city of the monuments,
It doesn’t matter where I hang my hat; it’s home to me,
The Blue Ridge Mountains tend to set me free,
It’s where I want to be,
Livin’ in the Sweet Virginia Breeze.”

This song about Virginia is considered to be the runner-up state song.

The lyrics refer to several Virginia sites, areas, and landmarks, including the state’s official bird. Because of the variety of birds that can be found, one of the most popular attractions in Virginia is the Virginia Birding & Wildlife Trail. It is a birder’s greatest ally for those seeking to observe cardinals or one of the state’s rarest species. The trail is the first of its type in the United States.

The song has also been played for Governor’s Inaugural Galas, The State Bar Association, and foreign diplomats such as the Queen of England.

“James River blues
That train came on through
And the world’s gotten slow
So wheres a boat man to go.”

The James River is one of the most important rivers in the history of Virginia and was essential for the trade and economic development of Virginia. The song is told from the boatmen’s perspective when they saw their job decline due to greater dependence on rail transportation in the mid-nineteenth century. Although the author laments change, the final stanza emphasizes the artist’s loving bond with the James River, allowing for a bittersweet concluding refrain.

The James River has always been a subject of devotion for Virginians, and modern citizens have many alternatives to develop their own bond with the river. Whether you want to tackle waves, fish, or just drift on an inflatable raft.

4. “Yorktown (The World Turned Upside Down)” by Lin-Manuel Miranda

From the planning process to the point of surrender, this song follows the Siege of Yorktown. This October 1781 battle forced the British Army to its downfall in the American Revolutionary War, painting a picture of the fight from start to finish.

Today, you may learn about the conflict through interactive exhibits and artillery displays. You may also traverse in the footsteps of the soldiers that gathered in Yorktown to clinch a victory over the British on the Washington-Rochambeau National Historic Trail.

5. “The Ghost of Virginia” by Justin Townes Earle

This song about Virginia is another historically important one. The lyrics in the song paint the scenery, from the train’s cold, black steel and the smoke spewing from its wheels to the screams and the nearby pine forest along the path.

This is not only a song about trains, but it’s also a Civil War song, as the train follows the route between Raleigh and Richmond. The path was so crucial to the entire war that the Confederate government had to resize the North Carolina Railroad to fit the size of the capital’s Richmond & Danville line.

6. “Carry Me Back to Old Virginny” by James A. Bland

This song about Virginia is somewhat controversial. The lyrics are heartwarming. The narrator misses Virginia and wishes to go back; he is homesick. But besides describing the nature and fields of Virginia, it also mentions cotton, which brings up the topic of slavery. Virginia was a slave-owning state, like many other U.S states of that time.

The narrator is a former slave who wants to return to his previous life on the plantation. While this romanticization of slavery is obviously wrong, it is important to mention that many Southern blacks saw their situation worsen the following abolition. This was primarily due to more racism post-abolition and Jim Crow legislation. The song offers a historical view of those events.

“Virginia
Light up my broken dreams
You pick me up
And sure make me smile.”

This lovely song talks about a long-distance relationship. The singer is heartbroken because his love interest moved from a more southern state to Virginia. He uses Virginia as a metaphor to talk about her and how much he misses her. This song could be interpreted in different ways; however, the artist talks about Virginia’s geographical location and how far north it is from him.

Just like the other songs on this list, Virginia serves as a backdrop for passionate feelings. In this case, the narrator of the song is in the titular state and watches the nightfall.

He likens it to his romance as he admires the moon’s majesty and the romanticism associated with the coming twilight. He resolves to make the most of the moon’s light until dawn arrives to dispel the romance.

9. “Trail of the Lonesome Pine” by Laurel & Hardy

“In the Blue Ridge Mountains of Virginia
On the trail of the lonesome pine
In the pale moonshine our hearts entwine
Where she carves her name and I carved mine
Oh June like the mountains I am blue
Like the pines, I’m lonesome for you.”

Like previous songs, this song is an example of connecting the beautiful nature of Virginia with the artist’s feelings. The song uses the imagery of Virginia like pines, mountain ridges, and trails. This landscape is used symbolically to describe a long and innocent love connection. An especially heartwarming part is when the song talks about where the lovers carved their names to symbolize their love.

“In the lush Virginia hills
They kept her as long as they could
Cause they knew when the white brother
Found white shell beads
Wrapped around her skin –
A life-giving river –
Her body open as will his hand
And with a “goodbye” there she goes.”

This Virginia song talks about important historical events through imaginary and metaphors.

The song also indirectly states the unfairness that the Native Americans were discriminated against and attacked even though they were peaceful and ready to help. The song reminds us of the historical events and highlights the Native Americans’ importance in establishing the first colonies.

11. “I Went Down to Virginia” by Frank Sinatra

With its harmonic melodies and catchy rhythm, the song tells a story about a man deciding to move to Virginia. He describes what he found there, the people, the lifestyle, the culture. Even though he was unfamiliar with the state of Virginia, he fell in love with it and didn’t regret his decision.

Final Thought on Songs About Virginia

Whether you’re planning to visit Virginia or you just want to know more about this fascinating state, this list will assist you in your quest. Listening to these songs can help you learn a lot about the state’s history from different perspectives. These songs about Virginia talk about the historical events, geography, nature, and culture while also integrating the authors’ deep emotions towards this state. It also gives us a sense of the culture and atmosphere of modern-day Virginia.

Get a feel for the music with the links provided for each entry.