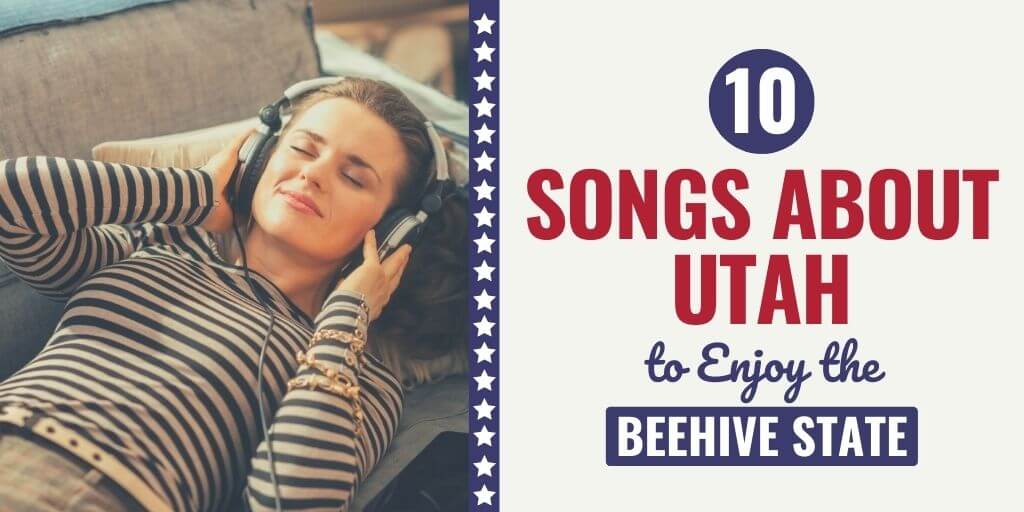 The history of Utah is one of the most unusual in the country. Many people who like movies about the West will recognize some of the natural beauty, strange traditions, and familiar settings in this place.

But do you know that Utah is also home to the heaviest living organism on Earth – a tree colony named Pando? There is more to Utah than meets the eye, and an excellent way to find out more is to listen to songs written about this state. That’s why we’ve created a list of 10 songs about Utah.

“Utah! With its mountains and valleys.
Utah! With its canyons and streams.
You can go anywhere.
But there’s none that compare.
This is the place!”

This is Utah’s official state song. In 2003, it took the place of “Utah, We Love Thee” as the state song after fourth-grade students at Cook Elementary requested a song they could enjoy singing.

Dana Love, a state legislator from the students’ home district, wrote a bill that was signed into law by Utah Governor Mike Leavitt.

The song mentions the beautiful nature of the state. It also enraptures the spirit of the people, with the emphasis on the idea that Utah and its people are constantly developing for the better.

As the title implies, this song is a tribute to the state of Utah. The author describes how his life in Utah used to be. He mentions some notable things that can be seen in this state, such as cowboys, Terrace Ballroom, and Symphony Hall.

He emphasizes how his experiences in Utah made him into the person and musician he is now. The author is grateful for everything that Utah offered him.

3. “Ballad for a Friend” by Bob Dylan

“Something happened to him that day,
I thought I heard a stranger say,
I hung my head and stole away
A diesel truck was rollin’ slow,
Pullin’ down a heavy load
It left him on a Utah road.”

In this song, the author talks about losing a friend in Utah. He died after a truck ran him over. This song is about a man who can’t handle what the real world has done to him, so he hides away from it. He expresses his feelings through the blues, which is the only thing he can do.

Rather than trying to explain what’s going on, he just sings it. He tells the story, numb and lonely and too upset to cry. There is no tampering with the truth, no chorus, and no repeats. The man simply has to accept it.

4. “Friend of the Devil” by Grateful Dead

“Ran into the Devil, babe
He loaned me twenty bills
I spent the night in Utah
In a cave up in the hills.”

The song’s lyrics tell the story of an unnamed narrator fleeing from a slew of pursuers – including two wives, a sheriff, 20 hounds, and even the Devil. Reno is his starting point.

He then travels to Chino and Cherokee in California, a cave in Utah, and finally, home, where he tries to rest. His fate is unknown. We never find out what happened in the end.

The lyrics don’t imply that the Devil lives in Utah, however. In an amusing way, the author mentions the many natural caves that can be found in this state. One of which serves the narrator as a shelter for the night.

“But in leaning lost her balance, fell in front of that wild tide
“Lay still, Lenore, I’m coming,” were the words that Utah cried
His faithful pony saw her and reached her with a bound
I thought he’d been successful, and raised her from the ground.”

An unknown songwriter created this traditional song named Utah Carol. It’s about the best friend of the narrator who put his life on the line to rescue a ranch owner’s daughter.

A red-colored horse blanket tucked under her saddle frightens the cattle, causing a stampede. His first effort to save Utah fails. After positioning her back onto the saddle, it collapses under her weight.

In another attempt to save his friend, he runs through the desert holding the red blanket in his hand. He succeeds in the end but unfortunately dies doing so.

6. “Salt Lake City” by The Dwarves

In this song, The Dwarves offer a sarcastic take on Salt Lake City. Before repeating, “I’m not going to Salt Lake City,” the song’s chorus states, “But there is one thing I wouldn’t do, even for you.”

Some of the song’s lyrics refer to well-known aspects of the city, like the Osmond family. For those who enjoy a good laugh about the city, or even those who harbor some resentment towards it, this song is for you.

7. “I Lost My Sugar in Salt Lake City” by Johnny Mercer

“I lost my sugar in Salt Lake City
Oh, why did I go there
I should have stayed down in New Orleans
And never gone nowhere.”

“I Lost My Sugar in Salt Lake City” was first released in the early 1940s and is another classic song. It has a bluesy sound and sad lyrics that were popular at the time. For Mercer, Salt Lake City is “a nemesis,” and the story revolves around a man who had his love stolen from him there.

This song is for anyone who has been unlucky in love while living in Salt Lake City.

“Utah, Utah is the place where I want to be
Utah, you tell me ‘bout all the places that you wish you could see
Just give me my home, my girl, my friends, my family
Give me time to rest my mind, then we’ll have a party.”

This is a catchy song about Utah that portrays the nostalgia the band has for their home state. They were born and raised in Utah, meaning that their friends and family are all there.

They miss them and want to return. It’s also a place where they can relax and have some peace and quiet. It’s the perfect song for anybody going back to Utah after a long time.

9. “The Beehive State” by Randy Newman

“I see the gentleman from Utah
Our friendly Beehive State
How can we help you, Utah?
How can we make you great?”

Utah is known as the “Beehive State” because of the significance of the beehive in Mormonism. Moreover, the beehive symbolizes the importance of hard work in the song’s final lyric. As residents of the “beehive state,” Utahans are eager to work and cultivate the land.

The song has a political undertone. To understand Newman’s assertion about American culture, one must understand the relationship between faith and business, which predates the Mormon colonization of Utah by two centuries.

10. “The Red Hills of Utah” by Marty Robbins

“How green are the valleys, how tall are the trees
How cool are the rivers, how soft is the breeze
If it’s just like my dreams, then I must go and see
For the Red Hills of Utah are calling me.”

The narrator is homesick and expresses this through the imagery of Utah’s nature. He mentions how much time has passed since he has been to his hometown. He grew up in Utah and feels like the red hills are calling him back. It’s another lovely song for anyone missing their home state.

Final Thoughts on Songs About Utah

This list of 10 songs about Utah will make you smile, laugh, cry, and feel nostalgic for this wonderful state. This playlist includes songs written by Utah residents and songs with references to the Beehive State in their lyrics.

Even if you have never been there yet, through these songs, you can get a feel of what it’s like being in Utah.

Don’t forget to click on the song links to actually experience all that has been described above. Maybe you’ll want to make Utah your next vacation destination.

13 Songs About California to Enjoy the Golden State

12 Songs About Texas to Enjoy the Lone Star State

11 Songs About Virginia to Enjoy the Old Dominion

11 Songs About Pennsylvania to Enjoy the Keystone State