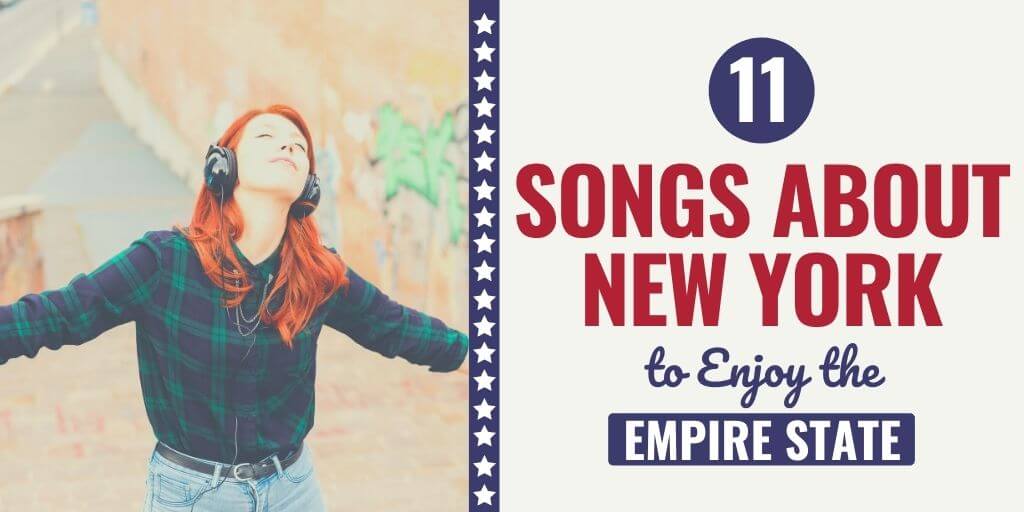 New York State is most famous for the city of New York. It’s a dynamic metropolis known for its luxury boutiques, spectacular Broadway musicals, and Wall Street. It has long fascinated visitors from all over the world. Apart from the bright lights, it’s also home to the iconic Statue of Liberty and Central Park.

Even if you’ve never had the chance to visit New York, you can learn about the lifestyle and culture through listening to songs written about this busy city. To help you to do so, we’ve collected 11 songs about New York in this article.

This well-known love letter to New York is essential for any New York City enthusiast. It powerfully depicts the city’s culture, from its dangers to its diversity, while focusing on its positive aspects. You’ll feel like you’re in Manhattan when you listen to it, no matter where you’re from. This song is for the visionaries, with plenty of New York allusions to keep any New Yorker happy.

2. “Englishman in New York” by Sting

“See me walking down Fifth Avenue
A walking cane here at my side
I take it everywhere I walk
I’m an Englishman in New York.”

Sting, a British musician, composed this song in the 1970s after hearing about a good friend’s move from London to New York City. As a timeless theme, this is a stranger’s viewpoint when arriving in a city and looking around before becoming used to the new environment. The accompanying ideas on how to occupy oneself and all the slight differences between the English man and the diverse New York culture are entertaining. The melody is still as infectious as ever, making it a great addition to any New York playlist.

“New York, New York
I want to wake up in a city that never sleeps
And find I’m a number one, top of the list
King of the hill, a number one.”

Even in a metropolis with an unlimited number of self-referential songs, Frank Sinatra’s performance of “New York, New York” may be the song that best expresses New Yorkers’ collective view of their city. The song serves as the anthem for three internationally famous institutions: Frank Sinatra, New York City, and the New York Yankees.

“It’s a new soundtrack I could dance to this beat, beat forevermore
The lights are so bright but they never blind me, me
Welcome to New York
It’s been waitin’ for you.”

This song by Taylor Swift captures the inspirational atmosphere of New York. Taylor said it best, “The inspiration that I found in that city is kind of hard to describe and hard to compare to any other force of inspiration I’ve ever experienced in my life. I approached moving there with such wide-eyed optimism and sort of saw it as a place of endless potential and possibilities.”

It shows the enthusiasm of a person who finally got the chance to move to New York after dreaming about their whole life.

“We’ll have Manhattan, the Bronx and Staten Island too
It’s lovely going through the zoo
It’s very fancy on old Delancy Street, you know
The subway charms us so, when balmy breezes blow to and fro.”

The pair isn’t rich, and it’s hinted that they can’t afford luxury, but they’re satisfied with mediocre views, yet the lyrics are infused with love for the city. Its version of Manhattan contains specific references to the era in which it was constructed. Each adds a unique taste that can be experienced while walking around New York City.

6. “Fairytale of New York” by The Pogues

“You were handsome
You were pretty
Queen of New York City
When the band finished playing
They howled out for more
Sinatra was swinging
All the drunks they were singing
We kissed on a corner
Then danced through the night.”

This one is a timeless alternative for both joyful Christmas music and sparkly visions of New York City. With elegantly placed mistletoe and icy strolls down Fifth Avenue, perhaps this time and place are pleasant and full of magic for you. Or maybe you traded up your aspirations for a partner you now despise, or your relatives are pulling each other apart in drunken anger.

Either way, it gives a satiric perspective on the holiday season in New York while having a catchy melody and excellent rhythm.

“It drops deep as it does in my breath
I never sleep, ’cause sleep is the cousin of death
Beyond the walls of intelligence, life is defined
I think of crime, when I’m in a New York state of mind.”

This song about New York shows the city from a slightly different perspective. The writing is superb, and it provides insight into lives that had previously been overlooked. Nas was influenced by his experiences as a youngster growing up in a city filled with risks.

“Well, my boyfriend’s in a band
He plays guitar while I sing Lou Reed
I’ve got feathers in my hair
I get down to Beat poetry
And my jazz collection’s rare
I can play most anything
I’m a Brooklyn baby.”

This humorous song takes a jab at several aspects of New York, notably the emergence of the hipster subculture and the urbanization that accompanies it. A fun perspective on New York from another well-known New York fan.

9.  “New York, I Love You, but You’re Bringing Me Down” by LCD Soundsystem

The cynical tone of LCD Soundsystem’s song about New York appropriately represents the ordinary New Yorker’s connection with the metropolis. There is love and affection, but there is also pessimism and cynicism, as well as the pervading notion that you can’t escape the city once it has become a part of you because its magnetism outshines everything else.

“I remember you well in the Chelsea Hotel
you were famous, your heart was a legend
You told me again you preferred handsome men
but for me you would make an exception
And clenching your fist for the ones like us
who are oppressed by the figures of beauty
you fixed yourself, you said, ‘Well never mind,
we are ugly but we have the music.’”

The Chelsea Hotel has been one of the most popular hotels for centuries, especially in the 1960s and 1970s. You can envision Leonard composing this song about the hotel in a room similar to the Chelsea Hotel, where he famously made love to Janis Joplin, the song’s protagonist. His phrasing is exceptionally impeccable in this song, leaving you with a bitter-sweet feeling of past love.

“Little Joe never once gave it away
Everybody had to pay and pay
A hustle here and a hustle there
New York City is the place where they said
“Hey babe, take a walk on the wild side.”

Lou Reed, the singer, represents the underground culture that molded New York in the 1970s. The song recounts their trips to the city and how it has inspired them. It’s a fascinating look into a culture that wasn’t well known but significantly affected the city’s development.

Adding these songs to your New York playlist will make you feel like you’re already walking the streets of New York. You will get a feel of the different cultures and subcultures that build the city’s spirit. Be aware that you also might get the sudden urge to move to this fascinating multimillion metropolis no matter where you are right now.

There’s no better way to experience the spirit of New York than to hear its music. Check out the links for the songs to get a feel for the state.