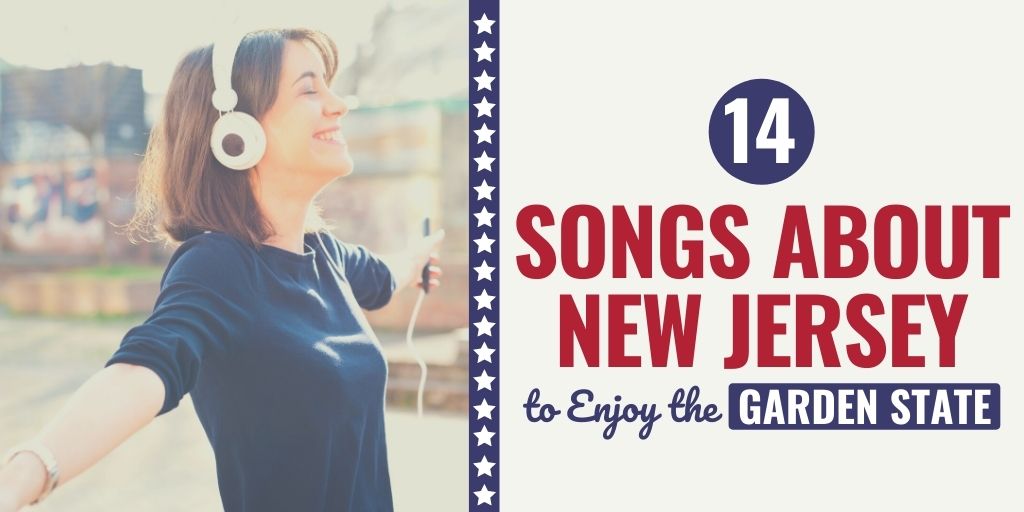 New Jersey has something for everyone, from miles and miles of golden coastlines to great food and a diverse history (Albert Einstein and Thomas Edison lived there). It’s also known as the Garden State due to its high-ranking production of fruit and vegetables.

But perhaps the best way to get to know a state is to listen to the music made about it.

Lucky for you, songs about New Jersey are easy to find as it is home to a rich musical heritage. From Frank Sinatra to My Chemical Romance, the third state certainly has something for anyone, no matter your vibe.

1. “White Castle Blues,” by the Smithereens

“Saturday night and it’s gettin’ late
I’m gettin’ hungry, I just can’t wait
Not just any kind of burger will do
I’m being hit by those
White Castle blues.”

Jersey residents of a certain age may have (albeit somewhat hazy) memories of spending late nights at the White Castle in Newark. This American staple chain probably played a major role in the lives of many hungry drink-filled Garden Staters.

If you’re planning on staying up late and want some food, then this is the perfect spot.

In 2014, New Jersey celebrated its 350th birthday. This tune actually managed to make it to 350 in the Jersey Songs series, made to commemorate the state’s rich musical heritage.

This 1995 Bob Marley cover gives us a taste of what it was like growing up poor in Jersey.

Like many places in America, New Jersey has subsidized housing developments (also known as the projects) where the poorest citizens would often live.

Both the original and the Fugees reworked version of the song leaves listeners with a sense of hope and optimism at the end.

For Jersey residents of a certain age, this may have been many people’s first kiss song. The Boss (Bruce Springsteen) declares his love for a Jersey girl in this 1985 hit, making girls from this state feel extra special.

“… Me and my mother drove to Newark, New Jersey
I hadn’t even seen my apartment. I remember I pulled up
I unpacked all my s***. You know, we went to Ikea, I bought a bed, I put the bed together myself.
I loaded up all my equipment, and the first beat I made was, uh, ‘Heart of the City.’”

New Jersey is a state full of dreamers. Often those who come to live there have their hearts set on making in New York. However, many stay in New Jersey due to the affordable housing and more chilled-out vibe.

Kanye captures this view of New Jersey perfectly in the final track on his debut studio album “College Dropout.”

In the song, Kanye lets us in on his journey from just being a producer to becoming the Yeezy we all know and love when he moved to the “Heart of the City” in Newark ( a song he ended up selling to Jay Z).

The song refers to the second US Navy ship to be named after the state of New Jersey. The battleship can be found on the Delaware River in Camden, New Jersey.

“Matchaponix, Delawanna,
Wawayanda, Timbuctoo
I call it the Garden State Stomp. Thank you very much”

This song is the perfect postcard to New Jersey, guaranteed to put a smile on your face.

The entire piece is made up of Jersey place names and some general associations with the state.

If you’re not from the Garden State, then a lot of this song may sound like total gibberish. Either way, it’s still fun to listen to and will definitely get your foot tapping.

7. “America,” by Simon and Garfunkel

“Counting the cars on the New Jersey Turnpike.
They’ve all come to look for America”

One of the duo’s most legendary songs tells the story of two lovers who decide to hitchhike across America.

Among other things, Paul Simon writes about a simpler time when the couple would be counting cars on the New Jersey Turnpike.

New Jersey often gets overlooked because of its proximity to places like New York City, but this song really highlights the simple beauty of being in the third state.

This song stirs a warm, fuzzy feeling in your belly whether you’re a New Jersey native or are just visiting.

Eddie Rabbitt recounts his life story as a Jersey boy, starting with his parents’ arrival from Ireland in 1924. He goes on to talk about his friendships, first loves and eventually moving away.

Throughout, he mentions key places in New Jersey like East Orange and Jersey Shore, which makes the whole thing ooze with sentimentality.

“(Raise your hands) From New Jersey to Tokyo”

This song was written to be sung out at the top of your lungs, so crank the volume up on your car sound system, and don’t forget to raise your hands (unless you’re driving, of course.)

This 1960s blues hit tells the story of a man who needs to leave his wife or girlfriend behind as he temporarily makes his way to New Jersey.

Long sings, “they say the town is jumping and there’s money to be found.” This paints New jersey as being a place of opportunity for outsiders that visit.

11. “The Private Life of Bill and Sue,” by The Beach Boys

“From Santa Barbara to Jersey Shore.”

This uplifting song is made in true Beach Boys fashion. When listening, all you want to do is pack a beach bag and go soak up some sun rays. Luckily, New Jersey is home to 130 miles of coastline where you can do just that.

In interviews, the band members heavily hinted that “The Private Life of Bill and Sue” was written with Ocean City, New Jersey, in mind.

Here’s another song dedicated to those New Jersey dreamers.

Because of its rich musical roots, many musicians with dreams of making it may head to the Garden State to kickstart their careers. It also helps that New York (the concrete jungle where dreams are made) is only a ferry ride away.

Dreamers need not worry about high NYC prices in Jersey, however.

This naughty song about New Jersey tells us the story of a guy speeding through the state and running away from the cops.

The New Jersey turnpike mentioned is famous for being the most traveled toll road in the entire nation.

Despite being covered by the Rolling Stones, this song was initially performed by Chuck Berry back in 1956. It’s also rumored that the Beatles may have used this song as inspiration for their hit track “Come Together.”

Okay, so this one might not be the greatest hit of all time, but a list of songs about New Jersey wouldn’t be complete without this tune.

The silly track was released in 2014 and is filled with funny puns and risqué wordplay inspired by the names of places in New Jersey.

The best part is that at the end of the video, the artists tell us how they dedicated all proceeds made from the song and video to victims of the Sandy Hook shooting.

Whether you’re returning or visiting New Jersey for the first time, check out the songs and videos to the above songs to get you into the Garden State of mind.

It doesn’t matter if you’re into punk and rock or folk and rap; this state has something for everyone.