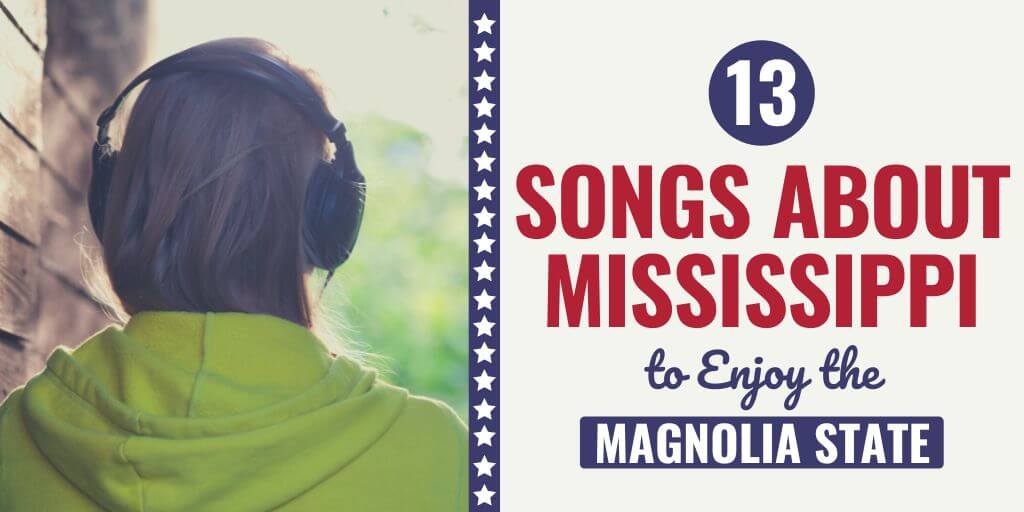 Known for its magnolias, bluegrass music, and southern charm, the state of Mississippi should be on everyone’s bucket list.

And did you know that Mississippi was named by the Chippewa Indians and literally translates to “large river”? Cool story, right?

But perhaps the best way to learn about this state is to take a closer look at the songs about Mississippi.

Musically famous for being the birthplace of the blues, Mississippi has been a place of inspiration for many musicians over the years. Considering the impact that this state has had on music, it’s no wonder that many artists mention it in their works.

Let’s dive right into some songs about Mississippi to give you a better sense of what kind of place it really is.

“… Getting born in the state of Mississippi.
Papa was a copper, and her mama was a hippy …”

Despite its title, this 2006 hit from the Red-Hot Chili Peppers mentions six U.S. states, including Mississippi.

The song focuses on a Mississippi-born girl named Dani (also mentioned in the band’s 1999 hit “Californication”) who lives a difficult life after moving to California. The song could be seen as praising Mississippi by saying that things might have turned out better for her if Dani hadn’t left.

In interviews, lead singer Anthony Kiedis has said that Dani represents many women he has had relationships with in the past.

Admit it. You’ve probably caught yourself singing along to this tune at least once.

True, the song only mentions Mississippi once, but it’s enough to put the state on the map as a place with a lot of “funk.”

Funk music actually originated at the same time as the blues in the 1960s. Where did it happen? The clue is in the title (wink wink).

“…City’s just a jungle, more games to play.
Trapped in the heart of it, trying to get away
I was raised in the country, I been workin’ in the town.
I been in trouble ever since I set my suitcase down …”

Although both are a big part of Mississippi culture, country and rock n roll are usually on the complete opposite ends of the spectrum. Fans of one generally aren’t too keen on the other.

What Dylan managed to do in this song, however, is build a bridge between these genres. In doing so, he perfectly captures what it truly means to be from the Magnolia state.

I get goosebumps just thinking about it.

“… I still like wearing my old ball cap.
Riding my kids around piggyback.
They might know me all around the world.
But, y’all, I’m still a Mississippi girl …”

You can take a girl out of the South, but you can’t take the South out of a girl. This rings particularly true in this sentimental song by country icon Faith Hill.

She goes on to talk about living in California but always remembering her humble roots. Mississippi is a state that prides itself on its Southern hospitality and simplicity. Miss Hill certainly captures that sentiment in this belter of a song.

5. “Down in Mississippi” by Sugarland

“…So, now if anyone asks, not that they would.
I’ll be down in Mississippi and up to no good…”

This song is centered around a woman who wants to go to Mississippi to live a less mundane life and let loose with her friends by hitting a casino.

In Coastal Mississippi, the sun never sets on a good time. People come from all over to get a taste of Southern nightlife.

Its fast tempo and heavy country influence makes this song the perfect tune to sing along to get you to start thinking about planning a night out in Mississippi.

Mississippi has inspired a myriad of love songs over the years.

But it’s not just natives writing about this Southern state. Pennsylvania-born Train front man Pat Monahan uses the Mississippi River as a metaphor for a lost love.

Again, this can be traced back to the hospitality state’s blues background. Often the songs were lamented over lost loves or tough lives.

“… Mississippi, I’ll remember you.
Whenever I should go away,
I’ll be longing for the day that I will be in Greenville again …”

This song acts as an ode to old country music, making it the perfect addition to any playlist honoring the South. It paints Mississippi as being a place that stays in the mind long after you leave.

The lyrics go on to talk about how the birth of rock n’ roll had ruined traditional country music by taking its soul – “Now the country song forever lost its soul. When the guitar player turned to rock n roll.”

We can’t have a Mississippi playlist without mentioning Kid Rock’s “Jackson, Mississippi.” The song was originally released in 2003 on the album of the same name.

The song is most likely about a guy who falls in love with a girl from Mississippi.

He compares her to the Mississippi River as though it were running through his veins.

“I’m shufflin’ through the Texas sand,
but my head’s in Mississippi”

Front man Billi Gibbons just can’t get his mind away from the state.

Interestingly, the song heavily implies the only blues spot worth thinking about is in Mississippi. It makes sense, right? It is the birthplace of blues music, after all.

Although the song didn’t quite win over the charts, it did win the people’s hearts.

10. “Going Down to Mississippi” by Phil Ochs

The history of the civil rights movement is deeply rooted in Mississippi.

Songs like this were often played back in the 60s as a means of protest against the awful treatment of African American citizens. While it can be difficult to comprehend, this was still an important time in Mississippi’s history that shouldn’t be forgotten.

In this track, Phil Ochs talks about traveling down to Mississippi to fight for the rights of African Americans.

Once again, it’s no secret that Mississippi has had a troubled past.

It’s important to remember the injustices of that past by celebrating artists like Miss Simone and listening to songs such as “Mississippi Goddamn.”

She spoke out against racial injustice at a time when people feared for their lives to do so. Total badass, right?

12. “One Mississippi” by Kane Brown

“One Mississippi, Two Mississippi
Three shots of whiskey
Are you on your way?”

Mississippi is no stranger to nightlife.

You’d likely hear this song stepping into a club. Brown’s genre-bending style will give you some idea of what the youth culture is like down in the South. He cleverly combines country and R&B – and it works surprisingly well!

This wouldn’t be the first time a Southern belle had charmed a musician. After all, it isn’t called the hospitality state for nothin’.

“Mississippi Queen,” tells the story of a lady from the hospitality state that went on to inspire Mountain’s biggest hit. It demonstrates the impact that this state can have on outsiders too.

Final Thoughts on Songs About Mississippi

We hope that these 13 songs about Mississippi have given you a better insight into just how interesting the Magnolia state is.

If you’re thinking of planning a trip, be sure to check out the tracks attached to get an even better feel of the overall vibe.

And once you’re there, have a look at some historical landmarks, check out the cuisine, and definitely visit the Kermit the Frog Museum.