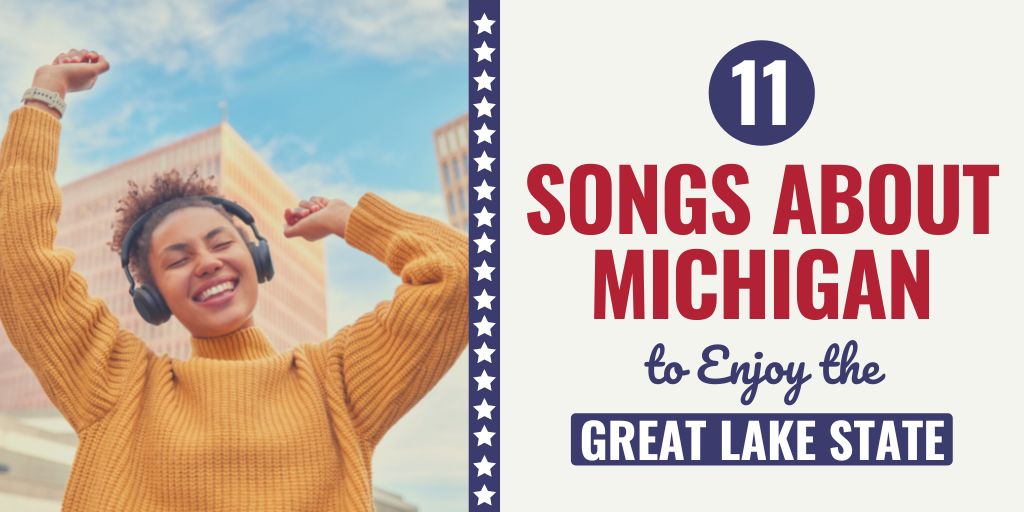 Michigan can take pride in its uniqueness, from the beautiful Petoskey stones to the amazing Mighty Mac. Aside from these well-known facts about Michigan, there is a reason why it is called the State of Great Lakes, having more miles of freshwater than any other state.

1. “Especially in Michigan” by the Red Hot Chili Peppers

Many Michiganders have enjoyed the occasional fishing on their long lakes. In the state nearly surrounded by Great Lakes, there are many to choose from where you can live out your fantasies fishing along the lakes with your friends talking about the past while enjoying a beautiful day in Michigan.

“It was summertime in Northern Michigan”

What better way to spend a hot summer night than by the lake with a campfire and friends? Imagine nights with only the moonlight shining through the water waves and no internet or electricity. That is what Michigan can offer to young people. Having fun with friends and watching the stars and the moon with the girl of your dreams, making this a summer you would never forget, as Kid Rock’s song suggests.

3. “Pretty Girl from Michigan” by the Avett Brothers

“I didn’t want to fall in love with anyone, but you did.
I can still hear the song,
The melody behind the kiss you gave me.”

Songs are meant to remind you of the heartache you felt loving and having lost your first love, amongst other things. The Avett Brothers wrote this song in 2012, intending to be their last “Pretty Girl from..” Yet, many Michigan locals have probably found themselves singing these lyrics while walking on the shores, remembering past lovers.

4. “Michigan and Again” by The Accidentals

“Michigan and Again” is the band’s first single in three years. This is a love song to the state of Michigan. When the band members were asked what they write about when they think about their home, they composed this song. It serves to remind every young person who has left their home of the beauty Michigan offers.

5. “Dancing in the Streets” by Martha and the Vandellas

“Can’t forget the Motor City (dancing in the street)”

Singing about dancing in every state and city in the U.S. is the beauty of this song, written in 1965. Amongst many cities, Motor City is Michigan’s greatest city. It got its signature nickname from its ties to the auto industry.

Other than that, Detroit is famed for its art, having painters such as Diego Rivera use his creative genius in this magnificent city. There is no wonder why there should be dancing on its proud streets.

Next to its lakes, Michigan’s clubs and pubs can be a great place for you if you are single and ready to mingle. Detroit offers a variety of clubs, such as Fantasy Island, where you can enjoy a few drinks while meeting some new folks. Or if the dating life isn’t your thing, you can always listen to the song by Mustard Plug and date Miss Michigan.

7. “Panic in Detroit” by David Bowie

“He looked a lot like Che Guevara, drove a diesel van
Kept his gun in quiet seclusion, such a humble man
The only survivor of the National People’s Gang
Panic in Detroit, I asked for an autograph
He wanted to stay home, I wish someone would phone
Panic in Detroit”

This song was written in the early 1970s in Detroit about the 1967 riots. The riot was one of the bloodiest rebellions in 1967, composed mainly of the African-American residents of Detroit and the Detroit Police. David Bowie took a horrific part of history and told it through a song. It made us never forget what had happened that year.

“Told her that I came from Detroit City
And I played guitar in a long-haired rock and roll band.”

The popular Alice Cooper tune was written by the guitarist of the band, Micheal Bruce, when he met a girl on tour. This song is beautiful because of its simplicity. You can hear the proudness coming out of the words “I came from Detroit City,” that is what the state of Great Lakes represents to its many residents, something to be proud of.

“I’ll go back home and claim my love in Saginaw, Michigan”

Although Johnny Cash, the singer-songwriter, is not originally from Michigan, he has still managed to capture the importance of the state. With the slow guitar play, the singer tells the story of a young man who longs to go back to Saginaw, Michigan, as a rich man to be with his love. It symbolizes the love many have for their home and how they are proud and grateful to return.

“I came up from the country, baby
City’s where I stay”

Along with the nature of this state, let’s not forget its famous city of Detroit. The Motor City is known for its connections with the auto and motor industries, but also it is a metropolitan area. You have probably heard that New York is where dreams come true; the same can be said about Detroit, which offers many opportunities to young people. So if you are from the country like our singer, you will indeed find your place and stay in the great Motor City.

11. “I Want To Go Back To Michigan” by Irving Berlin

“A certain someone full of charm;
That’s why I wish again,
That I was in Michigan,
Down on the farm.”

Written in 1914, many performers and singers have performed Berlin’s song since it was first released. Amongst the most famous was Judy Garland, with her powerful performance in the film Easter Parade. The lyrics paint the idyllic rural state of Michigan perfectly. It is a nostalgic reminiscence of fishing, walking by the state’s lakes, and enjoying the cities and their people.

Final Thoughts on Song About Michigan

The state of Michigan is unlike any other, and you can enjoy learning about its beauties through songs. Everything can be found here, from rock to old hip-hop and even musical theater. Musicians have passed through the cities of Michigan and were inspired by them to write songs in reminiscence of the state’s greatness. Make sure to listen through our selection of songs about Michigan above!