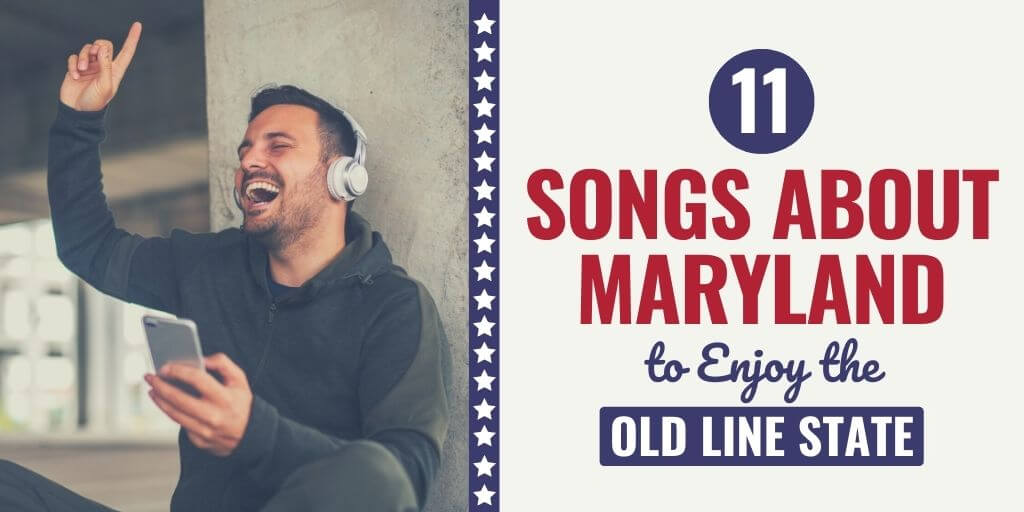 Known as the Free State, Maryland is recognized for its blue crabs, the city of Baltimore, and being the birthplace of the national anthem. There’s no doubt that the ninth smallest state is rich with culture and pride.

Star-spangled banner aside, there are many songs out there that really capture the charm of the Old-Line State. Whether you’re moving there, visiting, or just passing through, these 11 songs about Maryland are bound to make you feel closer to Little America.

In this track, Newman sums up the city of Baltimore, Maryland. Known for his darkly comic writing style, Newman discusses prostitutes, drunks, and hopelessness in the song. This song is an ode to a hardscrabble town amid the chaos of deindustrialization.

But don’t let that put you off. Despite its dark lyrics, there’s almost a sense of relief once the drum kicks in and the chorus of “Oh Baltimore,” begins. The catchy lyrics are guaranteed to make you feel a sense of pride towards the Free State.

“Good morning, Baltimore,
Every day’s like an open door,
Every night is a fantasy,
Every sound’s like a symphony”

If you’re a fan of musicals, this one’s for you. We couldn’t have a Maryland playlist without mentioning this hit from the award-winning production, Hairspray. Whether you’re from Baltimore or just visiting, this upbeat track would make anyone happy to be in Little America.

The protagonist, Tracy, is the epitome of optimism as she sings about her love for her city. In doing so, the track paints a colorful, fun, and lively image of Maryland’s most famous city.

3. “Six Feet Under the Stars” by All Time Low

“Meet me on Thames Street, I’ll take you out
Though I’m hardly worth your time
In the cold, you look so fierce
But I’m warming up because the tension’s like a fire”

Lead singer, Alex Gaskarth, said that this pop-punk hit is about “a place in your mind with no rules or limitations.” By referencing specific spots in Maryland, the track makes the listener feel as though Maryland is a place where one can go to be free.

Thames and South Broadway are both streets in Baltimore that are known for having several bars, restaurants, and shops. Thames Street is also famous for being home to the Thames Street Oyster House, where you can go to get a taste of Maryland’s famed blue crabs.

Now, here’s a track dripping in Maryland historical references. Written in 1861, this song was a reaction to the Baltimore riot of the same year. The original writer, James Ryder Randall, was a supporter of the Confederate States and even refers to President Abraham Lincoln as a “Tyrant” in the lyrics.

Despite being Maryland’s state song from 1939, in March 2021, it was voted that the song would be abandoned due to its controversial lyrics. Nevertheless, listening to this track is a great way to learn more about the Free State.

5. “Annapolis Anthem” by Airbud and GDA

“Downtown,
City named after Anna Beck words silla pen a city looking so handsome.
They don’t understand us, the city’s got no anthem, city
Put your hands up
Cos it’s the ANNAPOLIS.”

If you’re after a more chillaxed vibe, then look no further. Maryland-born artist Airbud eulogizes the city’s culture in this postcard to Annapolis. Annapolis is a city bursting with character and a rich history dating back to before the Revolutionary War.

The track touches upon all aspects of Maryland culture. With references to specific spots, local mentalities, and even crab cakes, this mellow beat is bound to get anyone in the mood to explore the Old-Line State.

Despite its upbeat rhythm, the lyrics depict a guy searching for meaning in a city where he seems to be stuck in his routine. Anyone who’s felt the weight of depression can find solace in these words. Why not head to Ballyhoo’s home state and see the band perform this hit live? Despite the heavy lyrics, this bop features an experimental combination of rock and reggae, guaranteed to get both natives and visitors grooving and headbanging to the beat.

This light-hearted indie tune is guaranteed to satisfy your wanderlust for Maryland. The song references the Ocean City Maryland Boardwalk – a spot filled with fun, food, and excitement. This boardwalk was even ranked one of the top 10 in the U.S. by National Geographic. If you’ve never been to the Old-Line State before, then Ocean City should definitely be high on your bucket list of sights to see if you decide to make the trip.

Even if you’ve never been to Maryland, this slow track will make you feel all soft and fuzzy inside when thinking about the state. Shepard sings “Maryland, I’m coming home,” which evokes feelings of belonging and comfort. Although Shepard has never been to Maryland, she’s stated that her mother urged her to move there for years and thus a romanticized ideal of the state led to the creation of this song.

Whether you’ve been in Maryland for five minutes or five years, this song will make you feel like you belong there.

9. “Crabs for Christmas” by David Deboy

“Don’t you know, Santa Dear,
With steamed crabs and a beer,
It would be like a trip back to old Baltimore”

If you find yourself in the Old-Line State around the festive season, then you’re sure to hear this tune playing in a local bar. Besides getting you in the mood for Christmas, this jolly song also celebrates Maryland’s love of eating crabs.

If you’re an avid foody and want to get a taste of the seventh state’s famous crustaceans, the peak season runs from April to the end of November. Although December isn’t the peak season, many places offer frozen blue crabs for anyone looking to incorporate the dish in their Christmas meal.

10. “Together in Maryland (That’s All I Need)” by Tony Cavallo

“We got each other and our home in Maryland”

Now, here’s a song best heard blasting through your car speakers as you drive through the Free State (probably on interstate 95). This uplifting banger will conjure feelings of joy and nostalgia for anyone hailing from this part of the country. The song references several key spots in Maryland, including Ripken Stadium, home of the Aberdeen IronBirds – an affiliate team of the Baltimore Orioles.

Baseball fans are sure to get a kick out of visiting Maryland, with players like Al Kaline, Cal Ripken Jr, and George Herman (Babe) Ruth all coming from there.

11. “Going to Maryland” by The Mountain Goats

This indie love song expresses feelings of pride and joy towards the State of Maryland. In the track, the singer compares his love interest’s eyes to the brightness of Chesapeake Bay. The great thing about Chesapeake Bay is that it has something for everyone – from beaches and mountains to cities and historical sites. If you’ve never been to Maryland before and are planning a trip, then you should definitely consider a visit to Chesapeake Bay.

Final Thoughts on Songs About Maryland

So there you have it. From the fun and upbeat to the emotionally charged, we hope that these 11 songs about Maryland have given you a better idea of what to expect from the nation’s seventh state.

Whether you want to ride a rollercoaster on the Ocean City boardwalk or get a taste of Maryland’s blue crabs, Little America is there to satisfy your needs. If you’ve never been, perhaps these songs will inspire you to make your way there.

Be sure to take a closer look at the songs and videos mentioned in the links provided.