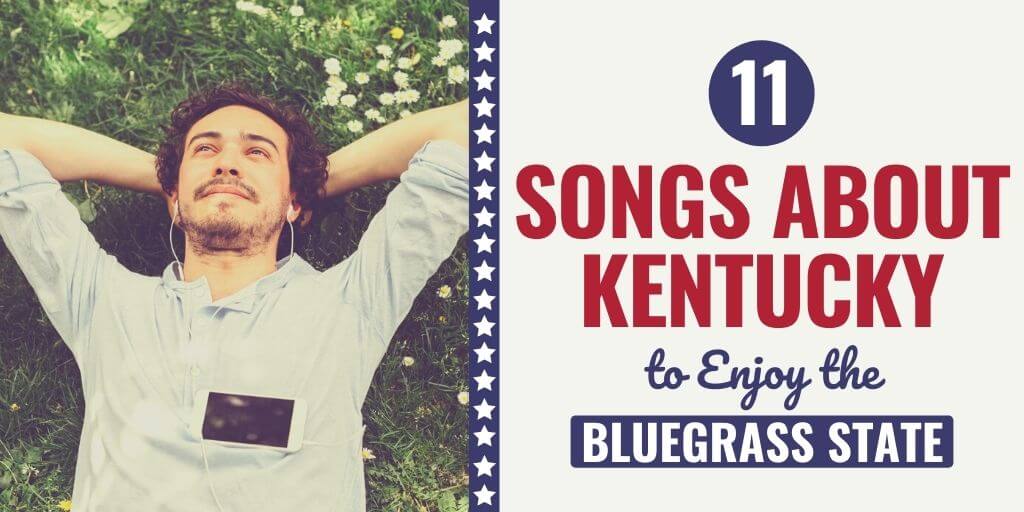 Kentucky is known as “the Bluegrass State,” and it earned the nickname thanks to the abundance of this grass that supports its prosperous farming industry. It’s a land of unique culture, bluegrass music, horse racing, coal, moonshine, and tobacco.

An excellent way to feel Kentucky’s charm is to listen to songs about it. We’ve compiled a collection of 11 songs about Kentucky that will get you acquainted with this beautiful state.

Kentucky has a vibrant musical heritage. Although it’s the birthplace of bluegrass music, Kentucky is also known for having many country music stars. Let’s check out some of the songs that center around Kentucky:

“Georgia, I love your big magnolia trees,
Texas, I love to feel the prairie breeze,
Tennessee, you made me what I am today,
But it’s gotta be Kentucky for me.”

A Kentucky native, Tom T. Hall devoted a lot of songs to his homeland, but many consider this one the best. In it, the singer mentions numerous other places he’s visited and describes why he likes them. In the end, he concludes Kentucky is his favorite.

Tom T. Hall sang about the emotion many of us feel; we love our home, but we can’t really explain why. Kentucky has his heart, and although other places are beautiful, there’s no place like home.

“Yeah, I’m proud to be a coal miner’s daughter,
I remember well the well where I drew water,
The work we done was hard,
At night we’d sleep ‘cause we worked hard,
I never thought of ever leavin’ Butcher Holler.”

Loretta Lynn dedicated this song to her childhood. It’s a memoir about how her dad worked as a coal miner and struggled to provide for his family. Although they were poor, her dad always made sure she felt loved. The singer never thought she would leave her hometown despite the everyday struggles, but eventually, she did. After a while, she goes back and states there’s nothing left there but memories.

The lyrics are powerful and resonate with the thousands of people who know and understand this life.

In this song, the narrator is an enslaved person that has been separated from his family. He’s longing to reunite with his family and tries to console his wife.

Stephen Foster composed this song in 1853, and it became the official state song in 1928. It’s an anti-slavery statement that is performed every year for the Kentucky Derby. “My Old Kentucky Home” is beloved and very dear to the hearts of Kentuckians.

“Yeah, there’s nothing like the line that runs from here to one-fourteen,
If the road was a song, this is what it’d say when you drive the Mountain Parkway.”

Mountain Parkway is a highway in eastern Kentucky, and many state attractions lie just off of it. The road travels right through the hills and enables you to enjoy the beautiful scenery while driving. In this song, the narrator is driving down Mountain Parkway and describing what he sees. He states that he has driven it so many times he could do it with his eyes closed, but the impressive views never get old.

“Kentucky rain keeps pouring down,
And up ahead’s another town
That I’ll go walking thru
With the rain in my shoes,
Searchin’ for you
In the cold Kentucky rain.”

In this song, the narrator is abandoned by the woman he loves with no explanation. He doesn’t understand why or where she left to, so he searches for her across numerous Kentucky towns. He’s soaked from the rain but doesn’t want to give up because his love is too strong. In the end, a preacher leaves him with a prayer that he’d eventually find her.

This song features a real restaurant in Greensburg, KY. The restaurant was originally called Adolphus Ennis Lunchroom, and the locals call it “the Greasy Spoon.” Many like to go there and play pool, eat, and drink, and Kentucky Headhunters were no exception: they went there after their shows.

“A lot of words are spelled the same with a different meanin’ you see,
Well, here’s a brand new way to spell heaven and accordin’ to me,
You take a K and an E, an N and a T and a U and a C K Y that spells Kentucky,
But it means paradise.”

Merle Travis, a Kentucky native, dedicated this song to his home. He compares Kentucky to paradise and mentions the famous Kentucky chicken. The singer says that although it’s a small state, it’s paradise to him, and he loves it.

“No one ever knew there was coal in them mountains
‘Tll a man from the northeast arrived
Waving hundred-dollar bills, he said, “I’ll pay you for your minerals,”
But he never left Harlan alive.”

This song describes how the coal industry is deeply rooted in Kentucky’s history. Generations of miners have worked in the mines there to provide for their families. Some dreamed about leaving but couldn’t due to poverty and the lack of jobs. Instead, they spent their lives in mines and weren’t able to leave Harlan alive.

Bill Monroe is called “the Father of Bluegrass,” so it would be impossible not to include him in this list. In the song, the narrator is heartbroken because his woman abandoned him. Although she left, he wishes her well and asks the blue moon of Kentucky to shine on her.

This is the official bluegrass song of the state of Kentucky.

10. “Run for the Roses” by Dan Fogelberg

“Born in the valley
And raised in the trees
Of western Kentucky
On wobbly knees
With mamma beside you
To help you along
You’ll soon be growing up so strong.”

A list of songs about Kentucky wouldn’t be complete without mentioning a horse-racing song. This beautiful track discusses a horse’s life, from birth to racing. The Kentucky Derby is also called “the Run for the Roses,” hence the title.

Although it’s dedicated to horses, the song has numerous interpretations. The lyrics could refer to any of us because they talk about the cycle of life.

“Kentucky woman
She shines with her own kind of light,
She’d look at you once
And a day that’s all wrong looks all right.”

The writer dedicated this song to the Kentucky woman he’s in love with. He mentions how special she is, but not because of how she looks, but because she carries a light within her. Her charisma is why he wants her by his side. The narrator states he doesn’t need much to be happy: just the good Lord’s earth beneath his feet and his Kentucky woman.

Final Thoughts on Songs About Kentucky

We hope you liked this compilation of 11 songs about Kentucky. Even if you’ve never been there, these songs will make it feel like home and provide a bit of the southern spirit many live and breathe. If you’re a Kentucky native, we’re sure this list reminded you of why you love the Bluegrass State.

If you liked this piece, make sure to check these out.