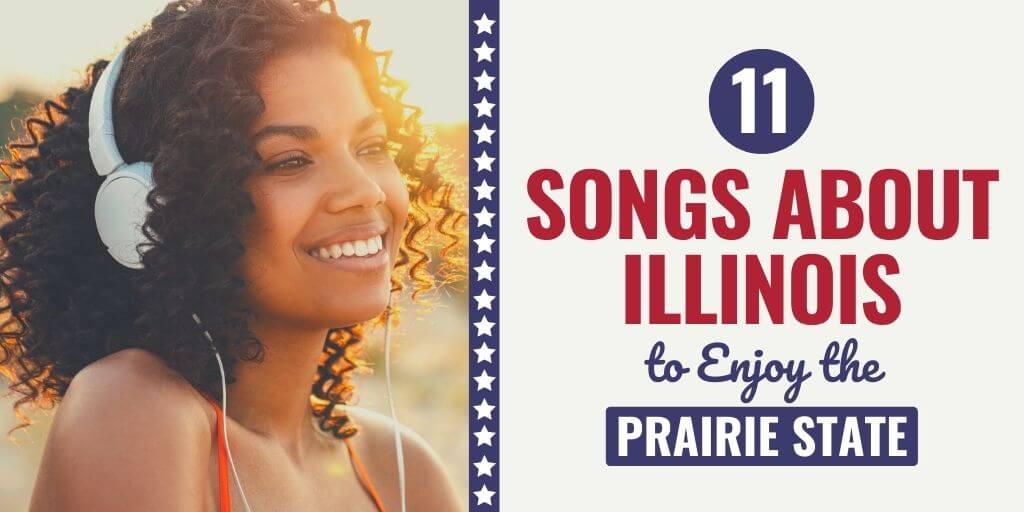 From its rich history to its breath-taking landscapes, Illinois is a hub of culture and a muse to many. Illinois is home to vast farmland, but alos has one of the largest cities in the United States. If you want to understand the spirit of America’s 21st state, listening to the music it inspired is a good place to start. Fortunately, Illinois’ music scene is bursting with inspiration. See the top rated songs about Illinois.

We’ve listed 11 songs about Illinois that are guaranteed to make you appreciate the Prairie State.

“Baby, don’t you wanna go home
Back from the land of California
To my sweet home Chicago”

This song is a classic roots of blues track. Originally sung by the legendary blues artist Robert Johnson, this tune is bound to conjure feelings of belonging and joy toward this part of the country. Chicago is known as the birthplace of the Chicago blues – a distinct form of blues music derived from earlier blues idioms, like the Delta blues.

“Sweet Home Chicago” has developed into a popular anthem for Chicago residents. The lyrics evoke feelings of pride for anyone residing there. If you find yourself heading to the Prairie State, be sure to listen to this classic tune to get you in a good state of mind.

“There’s a road I’d like to tell you about, lives in my hometown
Lake Shore Drive the road is called and it’ll take you up or down
From rags on up to riches fifteen minutes you can fly
Pretty blue lights along the way, help you right on by”

This song about Illinois is often praised by residents as painting an accurate musical picture of what it means to live in downtown Chicago. It acts as a postcard to the famed lakefront highway in the city. Often described as the most beautiful drive in the mid-west, the lakefront highway is a must-see landmark.

If you ever find yourself cruising down this highway, be sure to stick this track on to get the most out of your Illinois adventure. Whether you’re a native or just visiting, this upbeat indie track will guarantee to make you appreciate the Land of Lincoln.

This song has a way of making any natives who may have left Illinois feel homesick. With references to the flat prairies that stretch on forever, the song’s lyrics paint a clear picture of Illinois’ geographical landscape.

Known as the second flattest state in the country, the Central Plains region blankets almost the entire state and is home to fertile land, low hills, and stunning views.

4. “Illinois” by The Everly Brothers

“Clean Prairie winds blow from Rockford to Cairo
Over the cornfields that gleam in the sun
And off in the east glow, the lights of Chicago
When daylight is ended and night has begun
In Illinois, Illinois”

When listening to this nostalgic track by the Everly Brothers, one can’t help but feel a calling toward the state of Illinois. In the song, Chicago is referred to as the “heart of the nation.”

Historically, Illinois is valued as being one of the most important states in the country. Its centralized location makes it near raw materials and markets, plus has a myriad of transportation routes running through it.

5. “Concerning the UFO Sighting Near Highland Illinois” by Sufjan Stevens

If you’re after a mellow track with quirky lyrics, this tune is for you. This song about Illinois refers to a specific incident that took place in 2000 at St. Claire Triangle. Five police officers and other eyewitnesses claim to have reported an unusual object in the sky.

So, for all you space lovers out there, Illinois may be the perfect place to get a glimpse of a UFO sighting. But even if looking for aliens isn’t your thing, this chill track is the perfect background music for simply admiring the starry skies of Illinois.

6. “Come On! Feel the Illinoise!” by Sufjan Stevens

“Chicago, in fashion
The soft drinks, expansion
Oh, Columbia!
From Paris, incentive
Like Cream of Wheat invented
The Ferris Wheel”

Yes, we know, ANOTHER song by Sufjan Stevens. This guy is just too good at celebrating the Prairie State. The song about Illinois pays tribute to key historical figures whose achievements have contributed to the state’s rich history and culture.

For instance, the original Ferris Wheel was designed by George Washington Gale Ferris Jr. as a landmark ride for the 1893 World’s Fair in Chicago. If you ever find yourself in Illinois, be sure to check out the “prairie” architectural style dotted all over.

Here’s another track paying tribute to Chicago’s blues roots. Known as one of the most influential Delta bluesmen on the scene, Skip James’ lyrics convey a strong sense of homecoming in the Prairie State. This laid-back tune is the perfect addition to any playlist celebrating the state of Illinois.

Whether you’re a native or just visiting, be sure to take some time to listen and appreciate the musical genius of “Illinois Blues.”

“Take me to the bridge where the rivers collide
Down in Cairo, Illinois on a Saturday night
I might jump in
Everyone wants to hear a song
That helps the day seem half as long”

The rustic sound of this tune has country and bluesy connotations. The colliding rivers mentioned are a direct reference to the 30-mile stretch of Illinois where the Illinois, Mississippi, and Missouri rivers meet.

Stretching from Alton, Illinois all the way to the Kaskaskia River, the region is known as the “American Bottom.” This area has rich geographical history, making it a perfect spot for any sightseeing.

If you’re a Chicago Cubs fan, then odds are you already know this song. Pearl Jam vocalist and Illinois native, Eddie Vedder, is also a huge fan of the Cubs (in case you haven’t figured that one out already).

The folksy nature of the song makes it ideal for singing out loud and with a crowd. If you’re a baseball fan, why not visit Illinois’ Wrigley Field (also known as the Cubs Park)? Perhaps you’ll get to hear this Cubs anthem performed live.

This track depicts the story of notorious gangster Al Capone having a fictional shootout with police. The events of the song take place in the “East Side” of Chicago. Funnily enough, Chicago doesn’t actually have a geographical “East Side” because Lake Michigan is set East from downtown Chicago.

The area commonly referred to as the “East Side” in Chicago relates to a neighborhood on the far south side of the Illinois/Indiana state line. In contrast to the bloodbath described in the song, this area is actually known for being a quiet, residential neighborhood.

11. “The Legend of the Illinois Enema Bandit” by Frank Zappa

If you enjoy the darker side of history, this track is for you. Zappa drew inspiration for this song from the story of Michael H. Kenyon, an American criminal who became known as the Illinois Enema Bandit after being found guilty of a decade-long series of armed robberies and attacks on females.

Despite the dark nature of the lyrics, the Illinois song continues to be a fan favorite. For those who want to know more about the gory side of Illinois’ history, be sure to give this song a listen.

Final Thoughts on Songs About Illinois

From world-class museums (one being the home of the world’s largest T-Rex skeleton) to deep-dish pizzas, the Land of Lincoln has something for everyone. After listening to these 11 songs about Illinois, we hope you’ve become inspired to visit this unique state.

To get the most out of all the Illinois-inspired songs, be sure to check out the links and videos provided above.

13 Songs About California to Enjoy the Golden State

12 Songs About Texas to Enjoy the Lone Star State

11 Songs About Virginia to Enjoy the Old Dominion

11 Songs About Pennsylvania to Enjoy the Keystone State