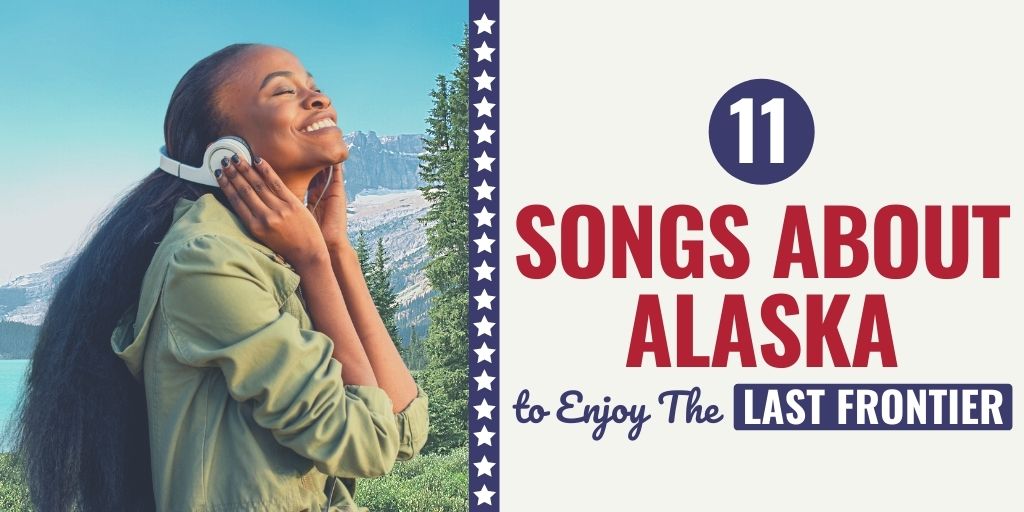 When thinking of Alaska, some may picture endless nights, igloos, and huskies. The truth is, Alaska is one of the most beautiful places to visit in the country. With its epic mountain ranges, breathtaking fjords, and a myriad of wildlife, it’s no wonder Alaska is nicknamed “The Last Frontier.”

However, to get the best picture of a state, it’s worth listening to songs about it.

As far as musical states go, Alaska is probably one of the last that comes to mind. Nevertheless, there are some songs about Alaska out there that can help get you pumped for a trip to the land of the midnight sun.

Here we’ll be looking into 11 songs about Alaska to satisfy your wanderlust.

“… Going up to Alaska,
Up to the land of the midnight sun,
Where the whale and polar bear run over the icy blue sea …”

Much like the cold wind of Alaska, the lyrics of the song grip you. At one point, Denver goes on to sing, “American child, does the call of the wind ever sing through the mist of your dreams?” These words are almost hypnotic, acting as a direct call to Alaska.

If you’re a fan of John Denver, then you know that his lyrics often relate to his undying love for the nation. Whether you’re a native or just a visitor, “American Child” is bound to give you Alaskan chills.

“I’m on the road to Alaska, nowhere near Nebraska.
But I’m sure if I asked her, she’ll know.”

Another hit to get you in the mood for exploring Alaska is “The Road to Alaska” by the legendary Bee Gees.

Although other states are also mentioned in the song, Alaska is the end goal, echoing its idea as “The Final Frontier.”

Another postcard to Alaska from American legend, John Denver, is the track “Alaska and Me.”

The song truly captures what it means to be an Alaskan, from the vastness of the wilderness to the friendliness of the local communities.

Lacy J. Dalton’s ode to Alaska is another hit that really captures the spirit of Alaska.

Country songs are known for hitting us with that state sentimentality, and this one does not disappoint.

Dalton sings about how she is heading to Alaska for some fun. The song paints Alaska as being the perfect place to go for an escape.

She sings, “Northern Lights are dancing through the ice and snow.”

This lyric gives Alaska a magical quality that makes the landscape sound like some winter wonderland. Inviting, right?

5. “North to Alaska,” by Johnny Horton

If you’re a country fan, then you’ve probably heard this catchy little number by Johnny Horton. With mentions of the Yukon River, northern lights, and huskies, this song perfectly captures the feel of Alaskan life. Whether you’re a native or a visitor, this tune is bound to make you feel a calling for the final frontier.

Unfortunately, the singer didn’t get to see the success of the song, as he died in a car crash in Texas days before the song reached number one on the Billboard country charts in 1960. But his songs can still often be heard in many Alaskan pubs and bars.

“… I was walking through icy streams that took my breath away.
Moving slowly through westward water over glacial plains …”

If you’re feeling a more “chillaxed” vibe, then this Maggie Rogers indie tune is the perfect song to get you in the mood for exploring the land of the midnight sun.

Inspired by a hike that Rogers took in Alaska back in 2013, the song perfectly captures how the vast Alaskan landscape makes a person feel small.

7. “Stephanie Says,” by The Velvet Underground

Rather than a literal description of the land, “Stephanie Says” uses Alaska to symbolize human resilience and letting go. To this day, much of the land is unexplored and may pose some level of danger. If you’re the thrill-seeking type, then this could be the ideal place for you.

“… Well it’s nighttime in Alaska.
I hear it’s dark until the spring.
Well, it’s been hell back here in Philadelphia, yeah.
And York ain’t what it was …”

Although not entirely about the state of Alaska, the song does mention the fact that it gets dark until spring. This is referring to the polar night experienced in Alaska lasting 67 days.

In the song’s context, the prolonged Alaskan darkness could also be seen as a metaphor for missing his brother.

“… Dreamed of the mountains up in the Arctic air.
Ice-covered glaciers; waterfalls were everywhere.
They’re called the wild, into the last frontier.
Stories by London, the dream it was so clear …”

Black Irish Band is known for writing songs about American landscapes, with Alaska being no exception. “I’ll See Alaska” is featured on the band’s 24th studio album, “This Summer,” recorded in 2013.

Band member Patrick Michael Karahan was inspired to write this song on his first plane journey to Alaska. He imagined what the state would be like in the music, making it the ultimate Alaskan wanderlust song.

10. “When It’s Springtime in Alaska,” by Johnny Horton

“I mushed from Point Barrow through blizzard of snow
Been out prospectin’ for two years or so
Pulled into Fairbanks, the city was a-boom
So I took a little stroll to the Red Dog Saloon.”

Yes, yes, I know it’s ANOTHER Johnny Horton song. But there’s no denying that the man has a way of capturing what it means to be an Alaskan.

In this upbeat country tune, Horton tells the story of spending an evening dancing with a redhead, only to have her husband-to-be throw a knife at him in the end.

This is a song you may come across often if hanging out in Alaskan bars and pubs.

So here’s another song about escaping your problems by visiting Alaska.

Funnily enough, Alaska is full of people seeking fresh starts in life. Perhaps it’s the laws, the small-town culture, or maybe just growing up hearing about how open, wild, and free it is up there.

Many people with troubled pasts look towards Alaska as an escape.

But don’t let that put you off. Native Alaskans are known to be good judges of character, making sure to treat you accordingly based on your words and actions rather than your past.

Whether it’s because of heartbreak or a petty crime, if you’re in need of an escape, then perhaps Alaska is the answer.

Final Thoughts on Songs About Alaska

From the light-hearted to the straight-up emotional, we hope that these 11 songs about Alaska have given you a better sense of what to expect from the great North.

Be sure to check out the songs and videos mentioned in the links provided. Who knows? Maybe the cold winds of Alaska will call to you.